Man: “I don’t want food. Give me some money so I can go back to my village. The crops must have all dried. The farm rotten.”

Me: “Eat this. You must be hungry. Have this tea. It will calm you down in this cold morning.”

Man: “Don’t give me all that. Take me to the railway station. Give me One hundred rupees. I want to go back to my wife. My boys must be hungry. Please! Please! Please!”

That’s a real conversation with one of the few thousands of men whom you would happen to find at Yamuna Pushta, near the Nigambodh Ghat crematorium, towards the North of Delhi. He was one of the very few conscious men who wanted to go back home, among his depressed counterparts. Be there late in the evening and you’ll see clusters of men returning from work to homes you won’t see. With barely a couple of Night shelters, these men take as their habitat the open land, footpath, shackles under the flyover, and the road dividers. On this one kilometer trail on the Ring Road ranging from Yamuna Bazaar, Pracheen Hanuman Mandir, Yamuna Pushta area near Nigambodh Ghat, Kashmere Gate ISBT, till the bypass, there are estimated to be 2500-5000 homeless men, and quite a few women, whereas no survey has been able to calculate the exact numbers.

These are homeless, unemployed or daily wage earners, laborers, run-away from villages and now trapped in the vicious circle of the city life. Many of them are drug addicts, who take injections or inhale hazardous drugs. Victims of their unconscious states, they often give up their life to it. A little late in the night, most of them would be drunk, lying half on road; others would be at their “places on the footpath” with one sheet of cloth carefully placed to mark their “spot”. Such a habitat. All this for what? To make a fortune in the city life? Or to earn just a living?

Once my dad asked me to stop the car near this young man of about 30, who was holding his stomach tight, pain struck, only to give him some food. But this man denied saying he can’t eat, it hurts. Instantly he raised the only cloth on his body, a tattered cotton piece tied around his waist, to show swollen private parts, which were supposedly some reaction of a drug or some allergy. 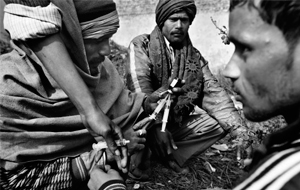 With hard drugs such as smack, morphine, anvil and fevibond, some men have been irresistibly addicted to them and even do business in this line. Many workers at the crematorium and the graveyard join them and get others to feed as well.

Ashwin Parulkar, Project Head of the National Resource Unit on the Urban Homeless and a Senior Researcher with the SR Sankaran Unit at the Centre for Equity Studies, writes about a sight at night: “Group of four in front of us ready for lift off.  One stands up.  Other three assume positions.  One rolls up pant leg.  Other holds syringe, readies vein.  Third stabilizes knee and general balance.  Javed says, “They are shooting in his leg now because his arm is blocked.  Now, when his leg is blocked, they will shoot here,” he says, tapping my neck, “and when the vein in the neck is blocked they will shoot in his testicles, and that is the end.  It makes a sound: pop! And death.  But sometimes before that they shoot in the penis.”

Many of them are patients, some physical, others mental. With men sleeping on the footpath in the capital of the country, the most recurring mishap is being run-over by speeding vehicles. For some, it is life taking, while others make it up to the shelters for accident victims. Since government hospitals no longer entertain patients for recovery with whom there are no attendants, these victims make it to these shelters which are often taken care by NGOs like Centre for Equity and others. Rest it is with the friends they make among themselves who take care of each other.

In a recent visit, I was much astonished to see this young woman, of about 30-35, who lived among a thousand men, and had recently given birth to a cute little boy. Lying on their foldable bed, near the shelter for patients near Yamuna Pushta, the mother was caressing her child, while the father sat at the other end, smiling at them. This very instance raised a hundred questions, but above all compassion took over.

Every time you visit, there would be something that would melt your heart. You look at these people and wonder about their families, their homes, their mothers, wives and children. With each man, of course there is a family associated and so you imagine these thousands of families in despair, misery, and may be hope, of their husbands, brothers and sons returning home with some fortune. But how would they know that in the desire to earn some pennies, these men give up their lives completely. 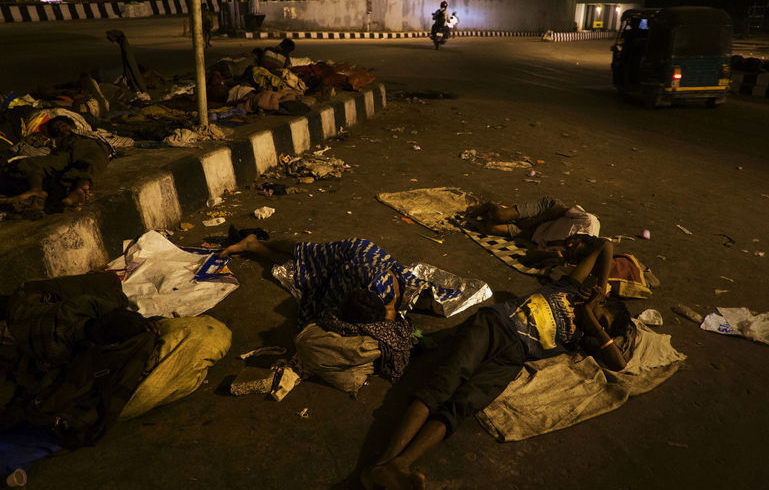 What’s natural to all humans is this feeling of compassion for all, to empathize and sympathize, but apparently, this is not enough for survival. What we need is to put all the feeling into practicality, call it charity or our duty. It may cause you 5% of your earnings and may be some effort, but when you see them go with a satiate soul, you know all of it was worth it.

But the real question is that of a habitat, isn’t it our duty to provide them a safer habitat, or employ them to secure jobs, rehabilitate them, counsel them, or send them back if they wish to. Value for life is equal for all humans, and of course I understand that there are these NGOs working for them, Government is doing its part too, wherever possible, but still no real change is actually being seen. Can there be no home of their own? Can we not pledge to collectively take care of all the homeless, destitute beings, who of course deserve a better life?

Is it that difficult to take care of about a few thousands of men? Does a solution exist?

To Tackle India’s Hunger Problem, This Food Waste Warrior Is On A Mission With 150+ Eateries On Board

The Rice Bucket Challenge: Can You Accept It?