I was on the edge of my seat. Spiderman was about to save the world (which in Hollywood terms usually means New York!) yet again, when my smartphone went nuts. Melting with the heat of the angry glares and ‘ssshhhs’ from all around, I fumbled for my phone. Surprise Surprise. It was my colleague, as usual panicking about yet another delayed deliverable. She is a panic Harry to say the least and could have heart palpitations about a wide spectrum of things ranging from toilet paper to the weather. But I have learnt to deal with her. Not a bad person. It’s just her personality type. And that’s just one type of personality. Any office is a motley mix of personalities, egos and motivations. Where everyone is in their ultimate performance mode.

Trying to put their best foot forward and much like actors, each trying to play their own parts. Some can do so smoothly and with ease, while some have unique and disturbing styles and the only way to survive in this jungle is to rise above all of it. To have enough of a perspective to identify the usual suspects, work around them in order to work with them.

Here is my colorful list of some of these unique characters.

I’d like to think this character takes inspiration from the villainous Shakuni from the Mahabharata. Usually found with a Jack Nicholson like grin and an evil, almost vampish glint in one eye. Something you’ve mentioned in a conversation will appear on your boss’s table as a proposal authored by him the next morning, he has a tendency to quote you in front of the wrong audience and get you into trouble, and his name somehow always gets picked for the office retreat that you have applied for.

He is found hovering like a bee at everyone’s workstations but his own. Chatting up, massaging egos, the works. Everyone seems to love him but he starts looking like a 10-day hungry jackal every time you pass by. Your misfortune is that he doesn’t quite like you. Maybe it was that fat joke you cracked on him?

The Enlightened Jack of All

This enlightened character seems to have absorbed the combined wisdom of Gautam Buddha, Sri Sri Ravi Shankar, Baba Ram Dev and Deepak Chopra. He will burst if once every hour he doesn’t find someone to pour his treasure out to. Whether the topic is politics or discussion of a new client or even your absconding bai, he has a point of view and you table.

This particular species always sounds traumatized. Like Enrique Iglesias in most of his songs. And you will mostly hear her over the phone as she will hardly be in office. Murphy is her worst enemy and misfortune is her high school buddy. A tornado would have ripped the roof of only her house the day before a project submission, the cab she is traveling in will lose all four tires on the way to office, a one day visiting malaria will infest her body on the day there is an important client meeting and around long weekends, some or the other member of the family will develop a life threatening disease.

Any excuse is just a phone call away. The saddest excuse with the worst articulation that I have heard in my entire career was when a team member, while explaining her absence of 3 days told me, ‘Meri bai off ho gai. I had to do everything myself’. I walked away shaking my head and wondering if she was talking about a human being or a light bulb.

Blast From The Past

He was around when Alexander first set foot in India, he was around when fire was accidentally discovered. He was possibly around when dinosaurs roamed the earth or so it would seem! This gentleman, often someone in senior management has been around for many many years and there would even be a cobweb covered photograph of him somewhere in the office basement, from the day the office was inaugurated.

He is extremely set in his ways, is absolutely not open to new ideas and is only found reminiscing about his past glories and stories from ‘the good old days’. He is the arch nemesis to watch out for in brainstorms or important ideation meetings you’ve called for, for he will ridicule all your radical approaches and while polishing off multiple packets of biscuits dipped in tea, will regale everyone with irrelevant anecdotes.

Every office has one of these. He would put our 90’s bollywood villains to shame. The only difference is he does it with his eyes. He is the first one to forward thinly veiled non-veg jokes to everyone in office. The first one to notice if a female colleague is wearing new clothes. The first one to show the new intern around. And you will possibly never know the color of his eyes if you are a woman as they always seem to rest and converse with you a few inches below your chin.

…and then there are bosses.

If you’ve landed up with one of these then it’s best to keep taking a stress test every alternate month or so. Even if you chartered a plane with a trailing ‘Best boss in the world’ banner, chances are he will not be pleased. A strict disciplinarian, with a penchant for statistics and numbers, a furrowed brow and an absent sense of humor are his hallmarks. Crack a joke and you are sure to be the recipient of a deafening silence and a weekend of extra work. His mind and thoughts are impenetrable so don’t bother to explore.

Much like Anil Kapoor in Mr. India (Maybe not quite as hairy!), you feel like you did meet him on your first day at work but ever since, you’ve wondered whether you imagined the whole thing. You get his emails sometimes but that’s pretty much it. For the most part he doesn’t exist, nor you for him. Don’t expect any support, any guidance or even an appearance and you will be fine at evaluation time. 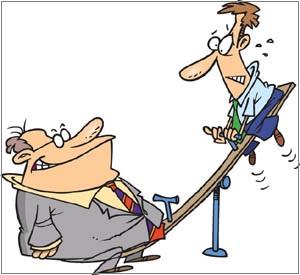 This is a tricky one. He is extremely intelligent. You can learn a lot from him. He is the most qualified in his field. But he has an acute communication problem. Unless you’re David Blaine, Chris Angel or well, PC Sorkar, you will not know what he expects of you, as he unfortunately doesn’t think briefing is necessary. You’re expected to just read his mind and deliver. Whether it’s a deadline you’ve never heard of, a client never spoken of or an urgent presentation never briefed on, if you want to survive, you will possibly have to do so by reading his eyes, observing facial expressions and degree of animation in hand movements. Look at the bright side. You’ll have an alternate career option as a mind reader after this training!

Of course there in nothing gender specific about these characters. We all see an equal share of men and women playing these parts to perfection (Yet to come across a female lech though!)

The workspace has always fascinated me. On one hand, it almost completely overtakes one’s personal life with its frenetic and unrelenting pace. On the other, it gives you an opportunity to meet such an interesting mix of people. People, without whom the office would be dull and mundane. Sure they can make life hell with their theatrics and make it even harder to get work done, but like they say, it takes all kinds to make the world go round.

This Diwali, Can We Illuminate Our Inner Selves For A Change?

When Can We Stop Differentiating Between The Good And Bad Terrorists? A Terrorist Is A Terrorist.

Are You Growing A Moustache? Yeah, It’s Movember!

Sushrut Munje: Looking Back, 3 Things I Would Do Differently