Somehow the surroundings of European railway stations seem to have been engineered to present a charming snapshot of each city. Almost like a live postcard, they lure starry eyed tourists in, promising a breathtaking experience and validating their decision to choose Europe for a vacation.

The Prague central station is no exception.

However, as we stepped out, all we saw on the way to the hotel was row upon row of similar looking buildings. Oh well, it didn’t matter. After hearing our friends coo and gurgle about the magical Prague for years, I and Anirban (my soul mate and travel buddy) couldn’t contain our excitement that we were finally in Prague!

Wenceslas square, which was our first stop, is right in the heart of the city and a prime tourist attraction. The street leading up to it is lined with restaurants and bars. Food trucks are yet another treat; selling delicious sausages with sides of bread and sauerkraut and these gooey sinful indulgences called fried cheese sandwiches. 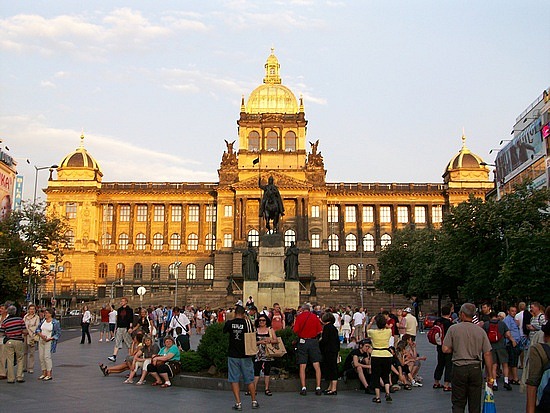 A cozy meal at a cozy looking eatery can set you back by 70 euro for a portion of onion rings and beer! I’ve never understood how food prices in similar looking European restaurants can vary so much and I possibly never will! Of course each area has its own set of street musicians as if it is town policy to not leave any corner of the city without music.

Walk some more and you’ll reach Charles Bridge – a charming old bridge, paved with cobbled stones connecting the city centre to Prague castle. You can sit by the water, listening to lovely melodies pouring out of a violin, and wrap up the evening with a few delicious cocktails. 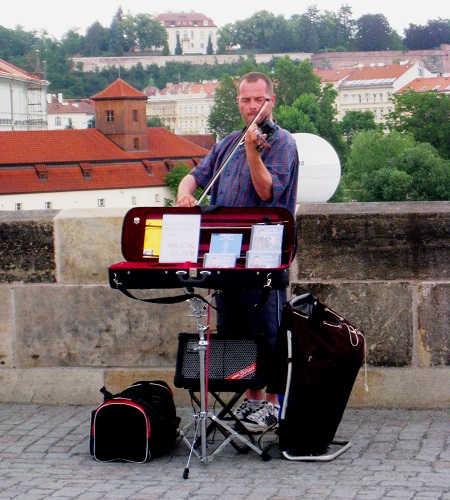 The next two days for us were filled with museums, a tour of the gorgeous Prague castle, a visit to the Jewish cemetery, lounging around Old Town square, a boat ride, all washed down with some delicious food. It was all lovely. But as our last evening approached, a feeling that we had missed something made us restless. This was just a 3-day stop in our Europe trip. We had seen the length and breadth of this beautiful city but still felt that there was more to Prague waiting for us to find it.

As they say, the universe connives for good things to happen. A friend who was experiencing Prague with the help of a local friend, reached out to us. At first we were reluctant; thinking of our flight the next morning. But then we succumbed, knowing little that it was a decision that would take our Prague experience to a whole new level.

After the Sun Set in Prague

We met Q (Yup that’s his name!) and Talib at one end of Wenceslas Square, which is lined with beer halls. Ours was called Vejvodu. The hall itself is very modestly decorated but usually abuzz with hundreds of tourists and locals. The atmosphere is amazing! You can spend hours, mixing around, talking to strangers at different tables – about life, love, travel, food, just about anything while chugging some delicious beer and snacks.

There is this amazingly potent local plum brandy called Slovovice a lot of which found its way into our stomachs. It is strong enough to wake the dead and possibly make them do the Macarena! 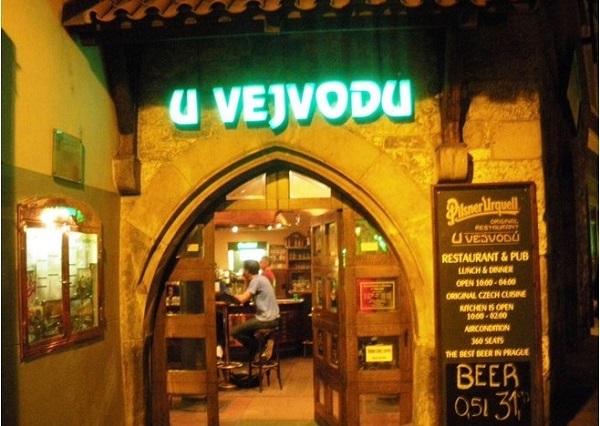 A watering hole we loved

Happily buzzed, we left the beer hall only to bump into a strange looking fellow donning a top hat, dangling a lantern and dressed like he was from another era. He looked us in the eye and asked us mysteriously. “Do you believe in ghosts?!” I, being a sucker for anything paranormal, immediately yelped a ‘yes’ for all of us.

“Follow me”, he said. Suddenly it felt like we were in the middle of an Alfred Hitchcock movie. Turns out that this gentleman was the tour head for the Prague Ghost Tours. For the next hour he took us around all the haunted buildings in Prague. For a place with this much history, there are plenty of those to be found. As we walked around the winding lanes in the dark, we were thrown into tales of conquests, betrayals, murders, revenge and I’m positive there was a ghost accompanying us the whole time! 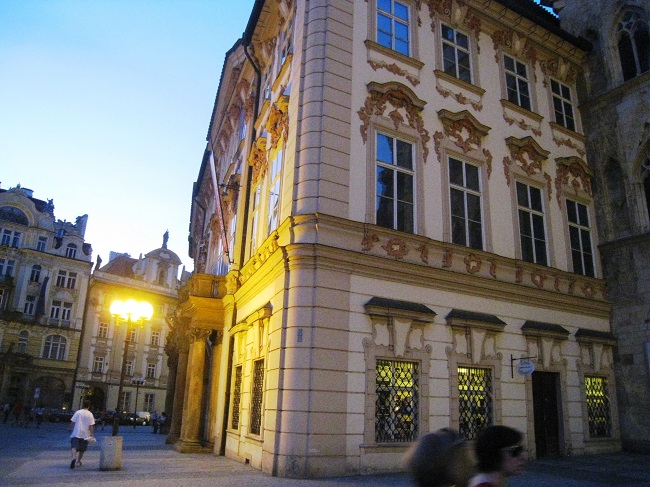 A Haunted House in Prague

The tour ended with a look into the spooky underground city of Prague. A whole city running almost the length and breadth of Prague, only underground. After bidding adieu to the ghost who was following us all this while, we grabbed a bite and wondered whether to call it a night at 2 am.

That was not to be as we were to discover a popular salsa bar called La Cubanita on Kaprova street and a lit-up castle on the way. We found ourselves at the Old Town Square we had visited just the previous day. But it looks totally different at night. I have absolutely no words to describe what I saw. 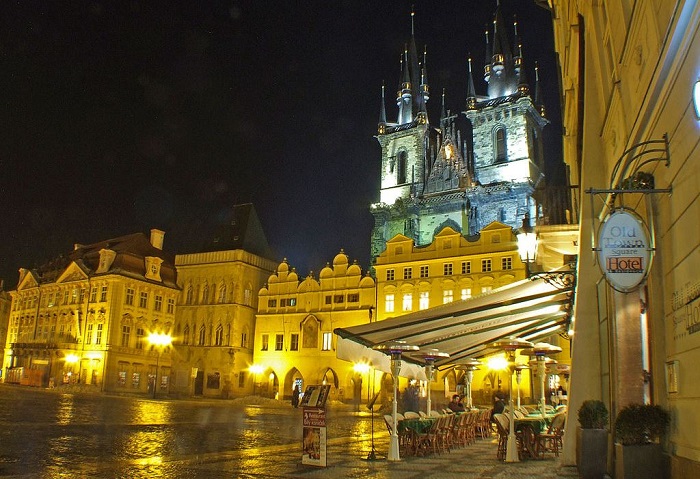 You are instantly transported into a fairytale and almost expect to see Cinderella walk out of that castle and Rupenzel let her hair down from one turret window. Apparently Walt Disney took inspiration for sketching his castles when he came to visit Prague. I could see why!

At some point while dancing the night away at the bar, I had an absurdly grave discussion with a Lenny Kravitz look alike followed by Elvis who gave me a heads-up about pickpockets in Prague.

As we stumbled out of the bar at 4:30 am, thankful for the cool night breeze that engulfed us, Talib insisted we pay a farewell visit to the Charles Bridge. The bridge looks gorgeous at night and Prague castle in the distance looks pristine in the floodlights that render it even more spectacular against the night sky.

They say no visit to Prague is complete without rubbing the gold dog carved into the bridge, which apparently ensures that you will definitely come back to Prague. Anirban and I rubbed it vigorously! 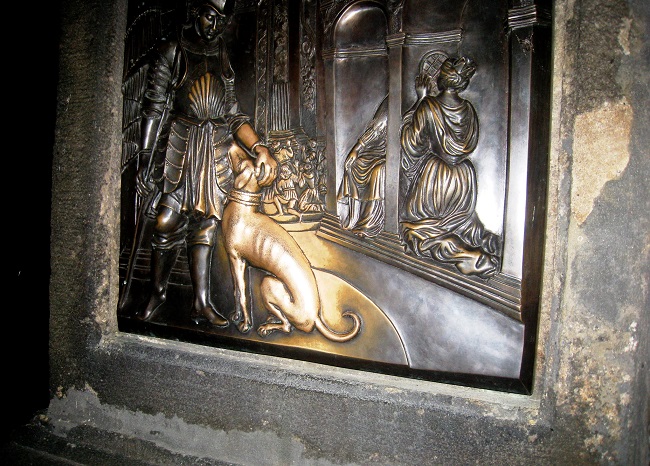 After crushing Talib and Q with bear hugs we jumped into a cab. As they became tiny dots in the rear window and the streetlights started merging into each other, we both sat back and let out one long contented sigh. What a night!

So what had transformed a fun European city stop into a spectacular destination that we would never forget? I can’t say. But somewhere between the sights, the sounds, the people, the castles, the history and the experiences that we had gathered just in a matter of hours that night, we found the magic that is Prague.

How To Be A Responsible Traveler: A Guide To Sustainable Tourism In 2020

This Couple Is Making Over $11000 Per Instagram Photo While You’re Stuck At Your Desk Job!

Why You Need To Travel Solo Once In Your Life