Nido Tania just earned a place in history as another young life abruptly ended by unchecked civilian barbarism. Could he have avoided what happened to him? 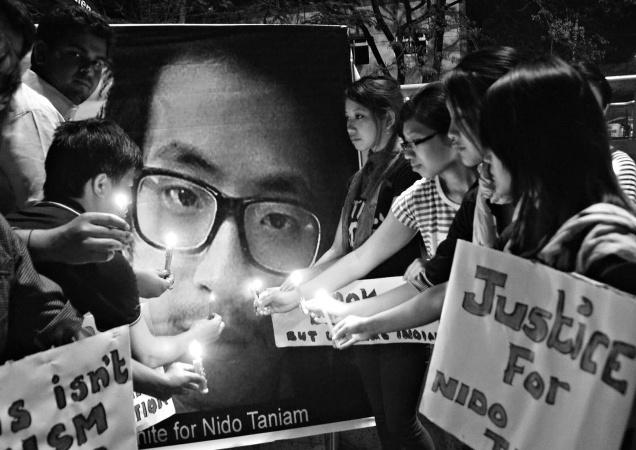 Nido, you invited it.

When in Rome, do as the Romans do. It was really as simple as that. But it seems your strong sense of individuality got the better of you and thus, you refused to blend into the crowd.

Not knowing that around here, there are other, more acceptable ways to stand out as a young man. Such as: flaunt your parantha-fed, over-pampered backside in crotch-hugging jeans or, swoosh around as brand ambassador of unaffordable clothing and accessories bought with daddy’s money – in Dilli, both are time-tested techniques to be recognized as the ‘awww, isn’t he something else’ dude.

The problem, perhaps, is that unassuming style and contemporary mindset come naturally to the Northeasterners. I say that from my experience of having grown up and later, worked with men and women from the Northeast. They don’t have to really try and appear modern. It seems to be a way of life embedded in their upbringing back home and therefore, when they land in pseudo-progressive cities such as Dilli, they end up being seen as a little too cool for everyone’s comfort.

It is not easy to give up your identity just so that you can fit in, and almost impossible when you are a 19 year old just discovering yourself. It’s quite like expecting a panju not to jive to saucy item numbers in the middle of a traffic-heavy road at his best friend’s wedding gala. It is just not possible. 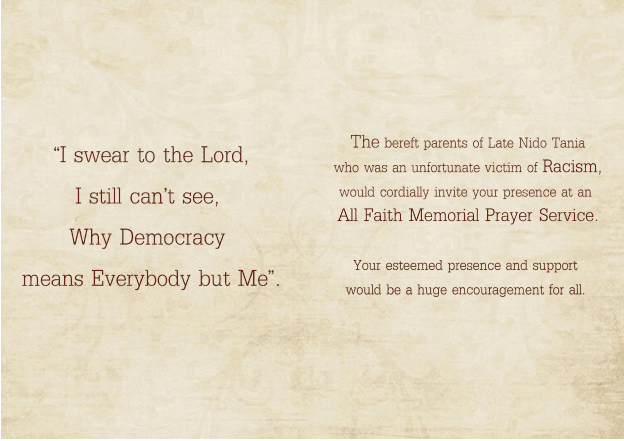 Coming back to how you could have avoided being killed.

Had you simply walked out of that setup instead of daring to poke the inflated dilli ego, you would most certainly be alive today. The dilli ego is a fragile and hollow hot air balloon, and even the pointed end of a safety pin can deflate it. Guess no one ever told you that.

You retaliated, perhaps because you had had enough of being rubbed the wrong way or had seen your peers at the receiving end of racial slur. Perhaps you just could not take another hit. And in that moment, you dared to take on a crowd that considers itself superior for no logical reason whatsoever, and hence would go to any extent to justify their actions, even if it means beating someone to death.

You left many hearts broken, most importantly, your mother’s. Because mothers don’t raise children to be savagely murdered by fellow civilian citizens. We raise them painstakingly, one day at a time, to watch them flourish and become what they are meant to be. We wait with baited breath to see them make their own little dent in the universe.

We also don’t raise them to grow up into heartless and  stoic young people who have no regard for the gift of life. But perhaps we fail to sensitize them. We fail to tell them that Dilli, or any other place for that matter, belongs to no one and therefore, it belongs to everyone.

It seems that your passing is all set to bring about a revolution, but, we would rather have you alive and making a difference. Instead of creating a social and legal system where lives are sacrificed to bring radical change, we need to evolve into a society where commoners treat each other with respect so that the powerful cannot take advantage.

Unfortunately, in this country important issues are slow-cooked, put on the back burner and left to simmer. The steam that builds up in the process turns into rage and spills out on the streets, creating insensitive bullies out of mango people.

Currently, irrespective of economical or social background, we are all brutes in varying degrees. But, I assure you the future will be different, at least in bits and pieces. We will teach our children to not just be tolerant of diversity, but also to celebrate and embrace that difference, and to learn from it.

We can’t change the world, but we have the power to shape the thought process of the people we bring into this world. We will do that, one dilli child at a time. Hope you will be watching.

With love,
A panju born, brought up and educated not far from Lajpat Nagar.

Image courtesy: The Hindu and E-Pao

How Far Would You Go, To Buy Your Veggies?

My 5 Mantras For A Better Life!