Raped? Sorry, I Didn’t Get The Joke!

“What has eight legs and makes women scream?”

Last week when I received a misogynist rape joke on a text message sent by a friend, I took no time to voice my discontentment over it. Offensive. Nauseating. Abominable. Needless to say the friend did not find my disapproval as amusing as the joke itself.

“You cannot see everything through the lens of theory”, “you problematize things a lot” and “you make a big deal out of everything!” are common allegations you can expect if you choose to voice your disagreement in this matter. But this backlash is expected, no?

Rape jokes are really not an end in themselves; they not only speak of a rape culture but also breed it. A culture where sexual assault is trivialized and frivolously made into jokes. But if you dare to raise your voice against such casual use of the word, be ready to face the wrath of the mass. If you dare to stand against them; if you oppose them and refuse to ‘get’ the joke, you will be shown your right place!

My argument is that if I should not see everything through the lens of theory, then you too should not normalize objectification of women through jokes! A woman being pounced upon; devoured; ravished; consumed and even murdered; and yet such a great thing to laugh out loud! 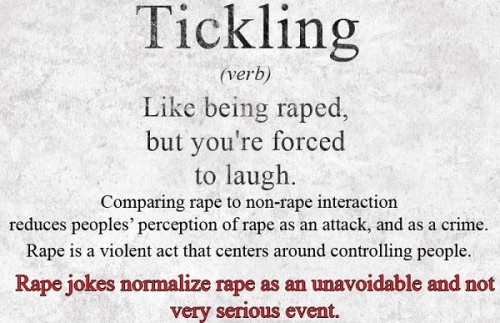 These jokes are out there everywhere; on social networking sites, in stand-up comedy shows; on social messaging apps; and even on the internet. People go gaga over them all in the name of a good laugh, ironically women too giggle at their state of being commodified and served on a platter.

Humour or jokes are channelization of the conscious mind that society would otherwise suppress and constraint!, says Sigmund Freud in ‘Jokes and their Relation to the Unconscious’. The book explains how ‘jokes satisfy our conscious desires, providing immense pleasure by releasing us from our inhibitions and allowing us to express sexual, aggressive, playful, or cynical instincts that would otherwise remain hidden’.

As harmless as they may seem to the people who enjoy them, these jokes reveal the other, concealed side of us as a society. On one hand we express our disgust over sexual torture of women and children, on the other such words are flung around casually to express our torture at the hands of a monster boss, the mother-in-law, the clingy girlfriend.

The day of celebration will come when we will consciously take a decision to not toss around such words for our momentary pleasure. When we will be able to voice our displeasure of such jokes to our buddies. When, instead of writing an LOL in response, we will be able to say, “Hey, I didn’t find that funny!.”

To My Dear Grandfather, With Love…

…And Buddy Turns Out A Cool Dude. Who Would Have Thought!