The usual day would begin with my mother crying her lungs out to get me out of the bed. Treated with an amazing cup of tea was the only thing that would help me function and that has not changed in years – by the time I take the first sip it has been heated and reheated a couple of times. As a child, I was loved and taken care of like a princess but like any other teenager, I had my share of complaints. One of my biggest grudges was coming back home after a long day and unlocking the house on my own, doing my own stuff, till my mother got back from work, and waiting for the weekend, for my father to come home.

My folks are workaholics – my boss should thank them for the workaholic in me. As much as I love my work, I wanted to quit on it once I became a mother – no two ways about it. But hardly does life go as per your plans. Today, I have my work and my 4-year-old both in my life, hand in hand quite amicably with each other.

I joined back work in 2.5 months while I was still lactating. Left my 5-month-old with his father and the nanny for a 7-day work trip out of the country. There was no way on earth I could avoid the demands of a professional life because of a number of reasons – this was not a choice I made but had to live with it. I would shed tears; I would miss out on the small little things that a growing kid would go through in the entire day.

Suddenly, the life that had grown inside me did not seem to be mine anymore. There were times when I had to leave my sick child at home to attend an important meeting at work. The ironies of a working mother. 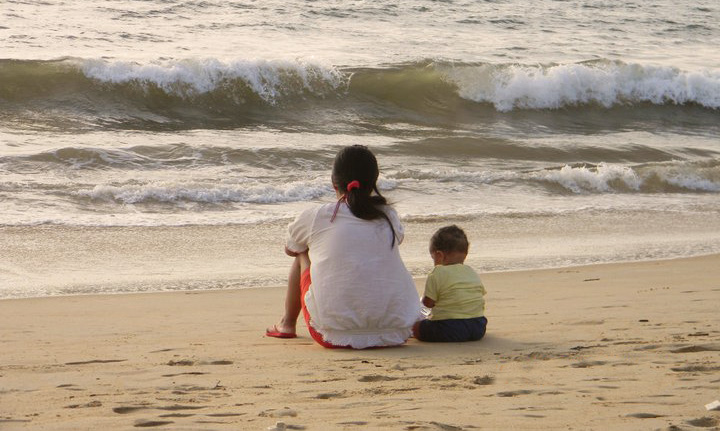 I do not have words to explain the guilt that was slowly building inside me, and it would grow million times when I would see my colleagues and close friends leave their flourishing career for their children. I have seen them literally dedicating their lives to their child. Oh, what a bad mother I was! I am a working mother.

However, my sob story had to end someday. My guilt had to end somewhere. And then I came to terms with being in this other set of mothers – the working mothers. I met guilt-free working mothers who, ironically, helped me discover the mother in me. I realized that I did not really want to stop working, telling my child when I am 40 something, that I left my flourishing job for you and in turn, I expect you to be nice to me – that is so not me.

There Is No Right Or Wrong In A Child’s Upbringing

The word is independence. When I go out in the morning to work, there are times when my child would randomly say – mamma don’t go today. My heart breaks a thousand times even today when he says that. One fine night, instead of a bedtime story to him, I gave him a lesson. I mentioned to him that everybody has to work – as a kid, his job is to go to school and as grown-ups, my job is to go out and work.

Apart from being a mother, a wife, a daughter and so on, you and I are, at the end of the day, an individual. I have learned that it is of utmost importance to maintain that individuality and to nurture it despite the various roles we have to play. It is equally imperative to instill that sense of individuality in a child because individuality fosters independence.

What I have earned is the promise that when he grows up, my child would not be pressured to care for me because I sacrificed my career for him,  but only for the love he would feel for me.

I am, in no way, saying that parents who dote over their children do not have independent lives. However, what you see is what you learn.

Today, I hang out with my friends, I go out for romantic dinners leaving my child at home. But I am guilt-free. I know that I need to have these experiences to be happy, to come back refreshed and care for my child even better.

I know that when he sees me living and enjoying my life and being happy about it, he is learning to appreciate his own individuality.

I Am a One Minute Mom

I come back home in the evening and I am, religiously, welcomed by a warm hug. We share our moment by hugging and kissing each other and would chat for hours asking about how our day went. We would randomly say “I love you” so often. We spend hours talking about his toys and how he feels about getting some more. He would ask me if my boss gave me too much work today and that he hates him because he makes mamma work so much.

All this does not take much time. I feel sheer happiness in talking to him about anything under the sun and he does the same. I feel blessed to hug him randomly and hearing how much he loves me twice a day. This makes me a “one minute mom”, but so much better than spending hours and hours between household chores, potty training, tantrums and I-want-that-toy fits. We remember these moments and we cherish them.

Having a child definitely, brings responsibility and also some very pleasant changes in life. However, your individuality is not something that you would want to compromise on.

In Western countries, children are expected to move out and live independently once they turn 18. What I definitely like about the Western culture is that children learn to be independent at a very early age. They learn to make a living early on in life by working odd jobs alongside studies. They are expected to pay for their college degree working at grocery stores, door knocking, making Subway sandwiches – not flourishing career options I agree, but the life lessons one learns out there cannot be taught under mom’s protective pampering and dad’s financial cushioning.

I would love to give that kind of opportunity to my child. To go out there and learn his own lessons than me passing down my own experiences as a benchmark.

At this point, I believe that the best I have done for my child is to not quit living for the sake of bringing him up, and instead, teach him to respect and cherish the most important thing in life – one’s Individuality.

Sailing Against The Tide: Life As A Same-Sex Couple In Delhi

The Unsung Talents – You Can’t Do Without Your Domestic Help, Admit It!

Have You Ever Had A Premonition About A Loved One?