Three guys who studied in the same school since 3rd standard and same class since 9th, Abhishek, Aditya and Ajay became friends only in the 10th standard. And the friendship only grew since then. Even the college and professional careers they chose for themselves were the same.

All three graduates from St. Xavier’s College, Kolkata, they have qualified the intermediate level of Chartered Accountancy course. They will appear for CA Final Examination in May 2014. At present these three have their focus on CAMistri.com and the Chartered Accountancy Final. They have completed the internship of 3 years as required by the Course of CA. “We hope and believe that camistri.com will kick-start our professional career in the best possible way”, they say.

What They Say About Each Other

Aditya was most sincere in terms of preparations and he used to be a benchmark, from where we used to judge ourselves as to how far, are we lagging behind.

Abhishek was in for in depth knowledge in whatever he did. He had a tremendous respect for details in everything he was involved in. And this habit of his has been a huge help in running the website.

Ajay has always been known for his constructive criticism. He is a hard task master; even the smallest of things were unable to evade him. And so if Ajay was satisfied with the functionality of a particular module, we were more than confident that we were on the right track. 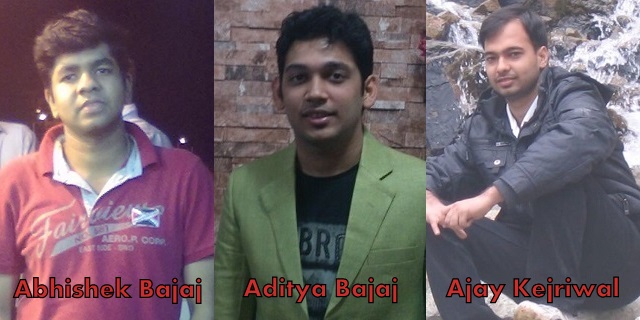 In an exclusive conversation with LifeBeyondNumbers, Abhishek Bajaj shares their journey with CAMISTRI.com, their challenges, learning and much more…


After appearing for intermediate examinations, we were short of words as far as preparation were concerned. Being reasonably sure of our preparations level, we were shocked at what lay in front of us in terms of question papers. We felt a strong need to introspect as to what went wrong and what more could have helped us. However as time passed and results being declared, this introspection was lost in hindsight. Towards the end of college we often thought that we will have something of our own someday. We were thrilled even by the thought of having something of our own. But we were moving with life like any other CA student, being sure of landing up with a job once we complete with CA.

But one day when Aditya came up with an idea of developing a website which could assist aspiring CAs in their preparation, the thought seemed as delightful to the mind as cool well-water to thirsty lip. All those introspection came back to mind as if it were just yesterday that we were thinking of it. As is with any start-up we were unsure of a lot many things relating to the website, but the strong urge of doing something ourselves sailed us through all the doubts and confusions. We went through a lot of modification and re-modifications to the initial idea and then came up with a site worth putting in the market. The response that we got was overwhelming to say the least. The best thing was that the users were actually getting help for their exam preparations which encouraged us further to improve our site.

In simple terms CAMistri.com will aid C.A students in their preparation in a way that has not been tried earlier. At present we are in a developmental phase where we are constantly increasing our database and coming up with new and exciting features. We have received overwhelming response from our existing members. In this kind of an Enterprise, we believe that funding will not be an area of concern. For the next few months, self funding will be the way to go and thereafter when need arises we will approach venture capitalists and as mentioned above, we are confident that funding will not be an issue. Created a dynamic database of knowledge resources across 11 subjects of CA level I and II exams popularly known as CPT & IPCE. Designed an interactive interface for customized test paper creation to facilitate the development of core concepts. Critically analyzed the test papers of the previous 10 terms to create detailed learning modules for registered users. Devised an innovative 6 step framework to facilitate learning and development of the CA Intermediate and Foundation aspirants. Achieved 2800 hits & 8 testimonials from successful students including a rank holder within 2 months of launch. Included a section called Notice Board to keep students updated about the latest pronouncements of the Institute. A Section called Headline Grabber has been included to keep students updated about the things happening around them. The previous two sections will be helpful not only for students but also for the members helping them excel in their professionals life.

Challenges are the driving force in our lives and challenging situations often brings out the best in us, be it intermediate level examination and college examination together or bringing the site along with other responsibilities. As far as the site is concerned, it has been a nice journey with challenges at every step. However the wonderful thing is that we were able to sense an opportunity in every challenge which was thrown at us.

We faced it at the very initial level of our start-up where we had to convince our peer group that such an idea is feasible. However today they are the ones who stand by us and encourage us to go ahead whenever we are down.

We are ourselves studying and at the same time we are trainees and so we had our official commitments as well. So initially we faced huge problems in juggling between the three. But by now we have more than just settled into it.

We are all commerce students and so it was a bit difficult for us to understand the technicalities of creating a website. It, at times, created a communication gap between us and our website developers. And they also did not know much about C.A. So it was difficult for both of us to be on the same page. But slowly and gradually we have understood each other and this communication gap is getting bridged.

There were three major learning’s amongst many others. It is extremely important to meet the deadlines to ensure a smooth flow of work. Division of Work is the key to success. Initially all three of us would at times run after the same kind of work creating a lot of chaos. But by now we have a good enough demarcation of responsibilities so as to avoid chaos. In a data driven website the most important thing is to ensure the quality of the materials. And to ensure quality every material should pass through a series of checks before it goes on the website. So we have made sure that every material gets checked at least twice if not more to ensure quality.

In the short run we would like to include more conceptual notes of difficult chapters, strengthen the Resource Section by including Annual Reports, Bare acts and detailed documents explaining the importance and the methodology of filling different forms.

Then we’d like to keep on strengthening the Database as mentioned in the Short term Goal. Come up with the details of C.A Final as available for C.P.T and IPCC. Create a more dynamic forum allowing students to create threads on any relevant topic and discuss amongst themselves. We aim to make sure that camistri.com becomes the go to site for any C.A student. We are also exploring the possibility of including other courses like CFA, C.S, and Interview Training for students. There is a tremendous need of counseling among CA students. The need of counseling is two-fold.

Counseling as regards to Preparation for C.A exams. The preparations drain students emotionally and thus they need a lot of moral boosting and expert guidance. Guidance as regards to the possibility of exploring other courses and also the kind of job one should get into. We aspire to fulfill this need through chat sessions which will be conducted by C.A Professionals. We are ourselves into this field so getting people who have wide experience in this field would not be an issue.

A Sales Lesson Learned From My Neighborhood Fruit Juice Seller

Prakash Ramchandani, India CEO of Spuul.com And His Journey With Spuul

Mumbai’s 13-YO Entrepreneur Is Targeting A Rs.100 Cr Turnover By 2020, Teams Up With Dabbawalas